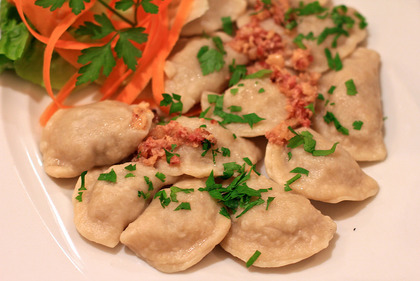 Pierogi
The well-known Polish dumplings called pierogi are one of national dishes and for sure one of the best recognizable Polish foods. The popularity of pierogi probably originates from the fact that this Polish food is varied, with quite a few fillings. So we have not only ruskie pierogi (with cheese & potatoes) But many other things to! 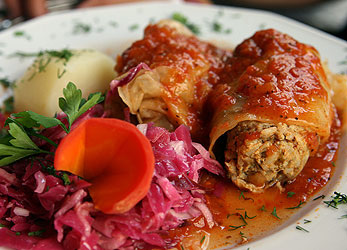 Golabki
Golabki or stuffed cabbage is one of a traditional food of Central and Eastern Europe. Polish golabki is a cooked knob of forcemeat wrapped up in a leaf of a white cabbage. Important ingredients are: groats (nowadays rice is much more popular), onion and an appropriate blend of spices. Sometimes mushrooms are added to the filling. Also some other variants of the filling exist in the traditional Polish cuisine, e.g. fowl, mutton or even with no meat at all (some vegetable-based golabki, but these are less common). This Polish food is stewed or fried before eating. When laid on plates golabki are poured over with a delicious dense home-made tomato sauce. Polish cabbage rolls are eaten with bread, sometimes with boiled potatoes. In the Czech Republic and Slovakia, stuffed cabbage is called holubce, in Germany the Krautwickel/Kohlrouladen. This great food is also known in Sweden where it is called the Kåldolmar.
​ 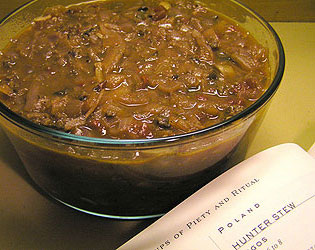 ​Bigos
Bigos, in English language known as the Polish hunter's stew, is one of national and traditional Polish courses. A true touristic 'must eat'. Bigos is a stewed dish made from cabbage as a main ingredient. Fresh cabbage can be used as well as the soured one, called sauerkraut. Hence, more than one kind of bigos exists in the Polish cuisine. Since cooking bigos usually lasts two to four days, the delicious taste of this Polish food is something really original and different compared to what you are used to . Apart from cabbage, on a list of ingredients you can also find: diced sausage, dried mushrooms, onion, sometimes apple or dried plums and a characteristic unchanging set of spices: bay leaf, grains of black pepper and allspice. White wine is sometimes added, but this is not a rule. Polish first course bigos is usually eaten with bread, only sometimes with potatoes. A slice of a good sausage can be also added. Bigos is also known in the Lithuanian cuisine.
Other Foods in Poland
Powered by

Create your own unique website with customizable templates.
Photo used under Creative Commons from Michela Simoncini